Feeling somewhat like I’ve jumped back in time 3 or 4 years, I’ve rally gotten back into WoW again. So here I am, at Shadowlands.

With 3 boosts (2 to 48, 1 to 50) on my account, and Mabaho almost at 48 I had plenty of options. Mabaho had earlier spent some time finishing story quests in Stormheim, then started the story in Suramar before hitting 48. Most of this time was spent trying to figure out how my key binds were going to work, getting some idea of a rotation, getting my head around WoW again. It seemed to take ages.

But he hit 48, and the Shadowlands quest opened up for him. I spent some time cleaning out the quest log. Amazingly, I seem to have an Alliance pet training quest, that I can’t abandon and I have to go to Teldrassil to complete. Very weird. Cleaned out some of his bags too. Didn’t open the bank though, at the moment the bank is like that one closet or drawer you have at home that you shove things in and never look at too closely.

And then into the story. It was still a little more time before I remembered to look up the key bind for screenshots.

Mabaho has entered the Maw, and spent some time working to save the world’s leaders, including his own Baine. There was a terrible moment when he thought Baine was about to die though.

Then it was the battle at the Keystone to find a way out.

Before appearing, alone, in a strange place.

The story has been engaging so far, but with the Highlord Mogaine and Lady Proudmore at my side the whole way, I’ve not really felt threatened, at least in the set pieces.

With Mabaho there, I boosted Mabango to 48. I spent the required time training and then in a similar way, some time getting a rough rotation set up on my key binds. I also cleaned out quests, mail and bags. Mabango disenchanted everything she could (all my sentimental gear is with Mabaho really). And then she entered the Maw.

I’ve not moved her from the very beginning yet.

Then it was Dasal (officially Magdasal from the server change so long ago) turn to step up. Same process, the training side piece (actually, didn’t mind it this time) and then the clean up. Then Dasal was into The Maw. And

And I didn’t take any screenshots 😦

Dasal has pushed off from the start, but not far. Dasal is feeling a lot safer as she has Mogaine and Proudmore as her companions. She isn’t really one to be up close and personal with her opponents.

I still have a single boost left. I feel I should pump Pumatay up. Because he deserves it. But I’m also thinking about maybe a different character? I have a druid and a death knight that I’ve dabbled in a little….

But really it should be Pumatay shouldn’t it..

94! And I got this leather thing working now too. Just gotta Pokemon some more Clefthoof!

So time to do some questing…. I am actually finding that this Garrison thing is slowing even my usual glacial levelling – I keep having to return there to park Mabaho for the evening.

So I followed some of the quests from within the Garrison. These had me headed to Talador. Looks like I’ve levelled past Gorgrond already.

The time also meant a chance to LFG, so after about 20 mins one popped. Iron Docks. First time here and seemed like I was on the lower end of the scale so I picked up some good gear here. Added to the gear from my Followers, it’s going well. 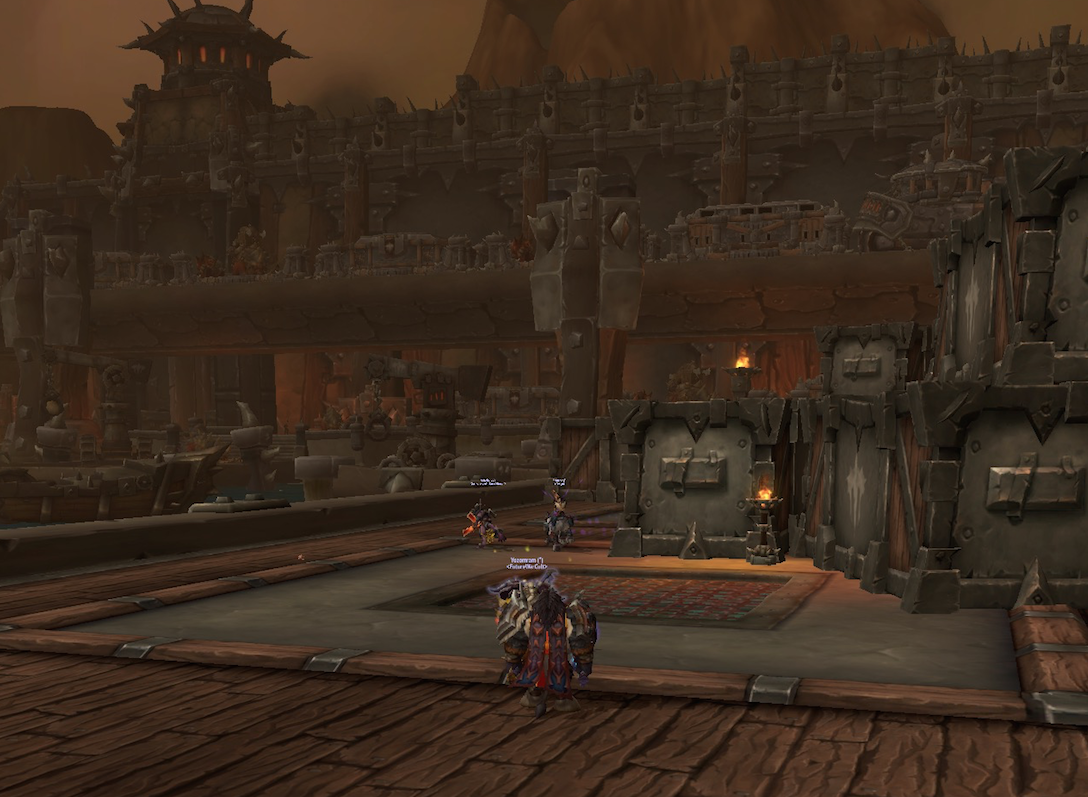 Out of the dungeon it was time to hand in some quests around Talador.

Before it was time to head back to the Garrison to set it up for the weekend work.

I haven’t been sitting idle, now that I am on my own in Canberra again during the week. I got Mabaho out questing. Found a couple of rares.

Levelled up the Town Hall in my Garrison. That opened up a couple of plots for me. 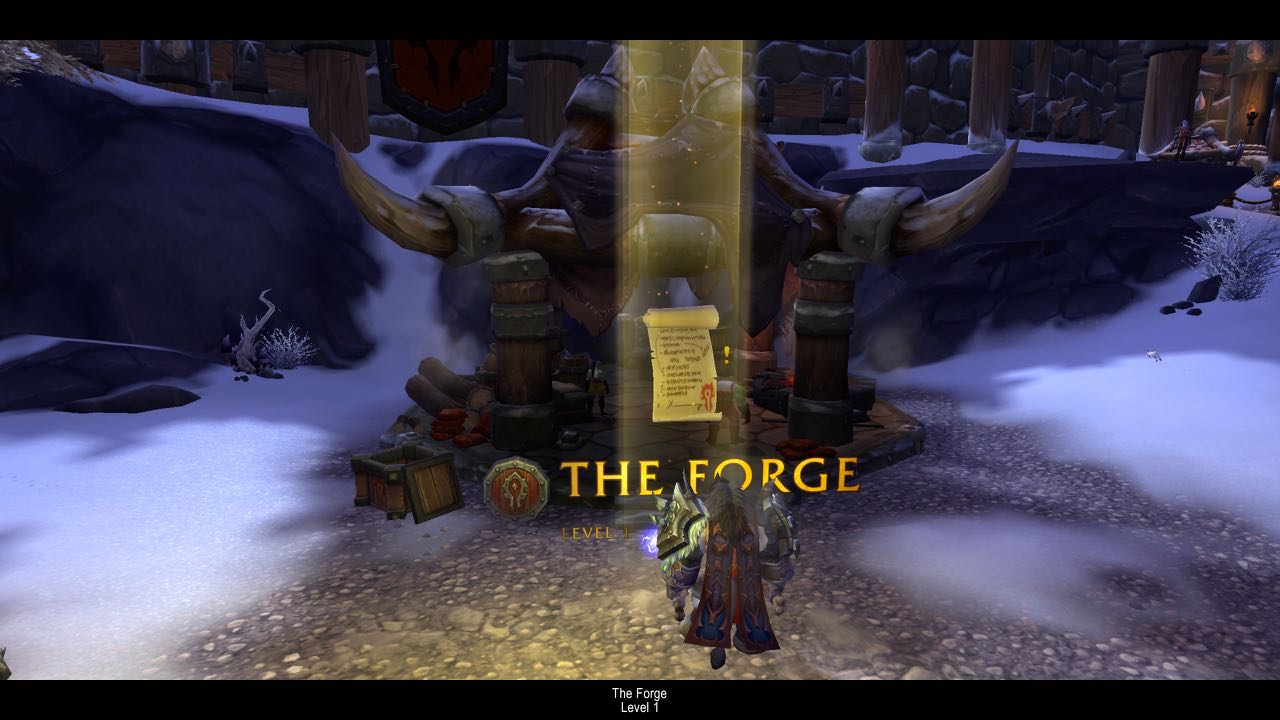 I also recruited a couple more followers, so I am up to five. I need to level these new two up as the others are at 93/94 already.

Out questing I did see this ogre. It took a second or two to realise what was going on. I had thought he was sleeping on his back but he was moving…

Watching for a moment…. he’s doing sit ups (crunches). A “helpful” guildie suggested doing push ups next to him, but I couldn’t find the command (wink), it was probably /gquit.

Lastly, for a good chunk of today’s questing I had company. Frost wolves – hunt in packs (like other wolves)

Here is me, my doggies (the Spirit Wolves), the Frostwolf that aids me randomly as I am a Wolf Brother, and two orcs (whose names I forget) and one of their wolves. You mess with me you get the whole pack 😉 Grrr….

Holidays, both the seasonal, and the enforced one as I recovered from my crash are over. Back at work this week and I need to knuckle down and get into this expac. I’ve already been left far behind most and I’m kinda sad about that. But I’ll make my own way again.

I’ve been logging in regularly into Mabaho though. It appears that if you leave your Garrison cache more than about 5 or 6 days it fills up. So regular log in and empty the cache. I’m hoping that will mean a flurry of building when I get some more building plans as I have a good size stash of resources.

I have also scrounged up 3 followers which is allowing me to do some missions with them I actually have them up to 92/93 and some additional xp for me as well.

I got back to my current quest hub last night, clearing a ogre tower for the Frostwolves. More quests tonight and I hope to find another follower or two in order to better complete some of the missions on my list. Need a couple more abilities.

I’ve also picked up some gear, some just from a proper look at what was in my bags. Jumped up a few ilevel to 507 (from about 480 before the expac).

Back into it over the week and then much more seriously next week.

Seems like many of the blogs I read have gone a bit quiet. I did expect more WoD posts from them but I guess many are racing to 100 not posting.

My own WoD experience has been so far very small. I logged in the first night and Mabaho started through the Portal. This was during the whole “I can’t get my Garrison”‘period and I was just sitting there amazed people were already up to that! I played for about an hour before knocking off.

Early the next morning I logged Magdasal in to find the steps of the Portal empty of toons. This made things hard for her but I got her started as well.

Niether toon is even up to 91 yet and I see the Frosties already have at least one 100 already, even with all the apparent login dramas. Great work.

I’m still at home recovering so am playing on the PC which isn’t as well set up (and I don’t have my Naga). It also means that all the usual family distractions are there, hence my leveling is so slow. I still have two weeks at home so I’ll be behind yet again.

I’ve liked it so far, though I’m still running everywhere with Khadgar, which I assume stops at some point. It’s a bit of whirlwind really.