The latest patch dropped, overnight I think. Amongst the return of 8man drops, a new hero mech and the release of some more cockpit decorations (for Christmas) was the activation of Electronic Counter Measures devices in selected mechs.

It has the following effects on enemy mechs when you are within the 180m effective range:

Now as an LRM mech I shouldn’t be this close…. except this can be where the scouts who provide me with targeting information are. Outside of 200m, the mech with the ECM is hidden from the enemy observers radar systems (though they will still be able to see the mech, they aren’t invisible – I guess thermal will also work)

Now this has a direct effect on my ability to fire at the mechs. The scouts have to be really close (but not too close, as above) and it takes me twice as long to lock up the enemy.

So what counters have we got….

TAG visually, and I can still prosecute the target. Effective range of TAG is 450m, and as long as the TAG mech is outside of the 180m, they can target the mech visually, fire TAG and this reveals the mech. Of course you will have to keep the mech TAGged. Sometimes this can be very hard.

But I think the big one will be ECM mechs being primaried in any organised action. Similar to EVE where Electronic Warfare ships are often primaried by Fleet Controllers.

I won’t get a chance to try this out until Friday I expect. The forums are already starting to buzz on this subject too. Its a new weapon and we have to refine our tactics. LRMs are still a valid weapon, but once again…. teamwork.

Saturday morning I finally got back on for a solid hour of playing. Then I managed a repeat in the evening. In the morning I ran with a random group I found on the US Teamspeak server. Lost every single match 😦 Bad luck, some poor groups, some good opposition… The evening matches started badly as well, and I think we only won a few overall. Though those were the matches were I got a kill or two (argh this must have really stuffed the totally unimportant K/D and W/L ratios).

Enjoyed the matches all day, except for the match where we ended up as two friendlies (Atlas and my Cat) vs single enemy (Jenner). He killed the Atlas leaving my very non brawler Cat with half of my team spectating* through my mech.

I was getting a lot of comments about shooting snow and learn to play etc. Listening to my PUG on TS, it became apparent that they and I were seeing quite different pictures and the lag meant that I was shooting the Jenner about a second or two after he had gone past. But in my view I was shooting him (and doing stuff all damage). The Jenner eventually picked me apart as well. Not so much fun.

In other news, the patch doesn’t seemed to have affected my game much so far. A new mech, the Cataphract, has arrived. Some tweaking to some weapons, but not ones I use at the moment. There are some concerns that the lights have received an unintended boost to their lag armour**, perhaps that’s what I saw above. The worst news is that they delayed the return of the 8man. December 4 is the newest rumour.

A couple of personal developments here…

I know it doesn’t look like much, but that’s a screen capture. YAY, now if I can just remember to do them in game all the better. Turns out I just needed to dig about in the Apple Support site to find out the way that this Apple USB keyboard maps to a Windows keyboard when the iMac is dual booting. So look forward to some actual screenshots from me soon. Because it isn’t exactly the most most obvious relationship.

I’ve also dug through my hoard of old PC stuff and pulled out an old 17″ LCD that I’ve added to the Mac as a second monitor. This means I can, for example, have the TS window open there and see who’s talking to me.

Oh, one last thought…. if anyone knows of any MWO blogs out there, please let me know as I’m keen to build a blog roll and community for this game as well.

*When you die, you spectate through your surviving teammates. You can swap between survivors. You can still chat too.

** Lag Armour is the nickname given the rubberbanding and lag induced difficulty in hitting the faster running mechs. Has been of varied effectiveness throughout the games development. At the moment there is some opinion that it is very strong. 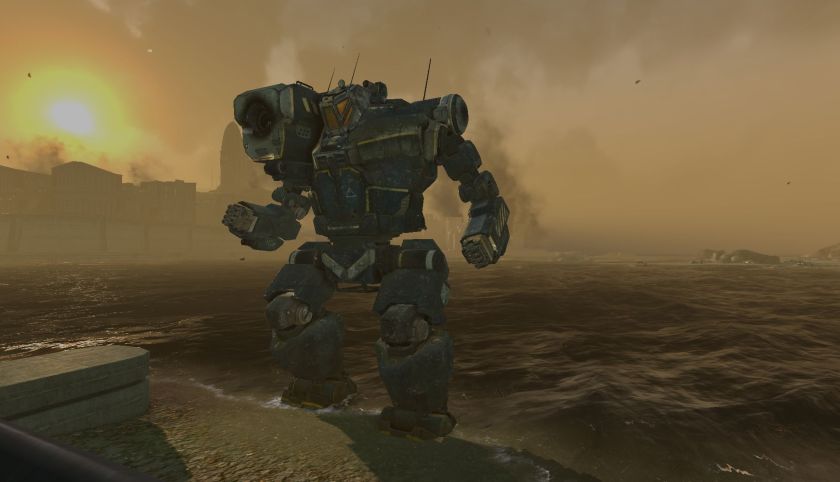 Last night was my first chance to play since a couple of big changes were patched into the game.

Artemis Fire Control was added. This adds to any LRM or SRM and improves their targeting and grouping to result in better hits and hence more damage. However (and its apparently being patched tonight) this has resulted in LRMs that follow a very ballistic path and create plunging fire on the upper part of the mech, with significant improvements in damage. They are patching to turn normal LRMs back to their normal flightpath.

They have changed the way premade groups work as well. As the first stage to their process, until Nov 20 you can only form groups of 4, but you will still launch with 4 more players on your team. I’m uncertain whether this can be another 4 group, or is only singles. A well drilled lance (in BT universe, 4 mechs are collectively organised as a lance, 3 lances to a company etc) can still work well on this field, but it is more difficult and harder choices must be made about what mechs to field prior to drop.

I noticed one other change, they’ve added a great big busted container ship to the Forest Colony map. Effectively they’ve added cover on the long water side of the map. As a scout or indirect fire support mech, I love it. I imagine the long range direct fire mechs don’t.

So last night I grouped up with some AMC mates and ran a Jenner. They already had an LRM Cat, an Atlas and something else that I can’t remember, so another LRM Cat would have weakened the lance too much. At least for general work. If we could have been sure that we would have been fire support, I think it might work well.

We played about 5 (maybe 6) games. I died once after getting legged in their back line. Was never going to be pretty. Another game I spent running and hiding in the broken ship trying to keep a Cat and an Atlas in view for the FS. The ship actually. gives really good cover if you’re in close enough.

I need a lot more practice to be an effective scout, plus I really need to spend some time as a brawler, simply so I can bring more options to the team if required.

Overall, no problems with Artemis, I like the new ship and I think the 4 man rule will do two things. Drive people crazy as its annoying as its really frustrating after weeks of the full 8 man. However a tight lance will only improve their game. So I recommend for the organised players to get in there and practice with this limitation.