Been a week since we got back to Australia from NZ. It was a great trip and I got two MTB rides with my dad. I was very impressed with the trails around Rotorua, they were fast, fun, smooth and extensive. Busy as well, but it was the school holidays so I guess that was to be expected.

Dad lives close enough that after a couple of km we were at the base of the trails. From here, both times, it was of course…. UP.

No sweat for him, but his poor Aussie son (and previously his poor Aussie son-in-law) had to walk parts of the up. But we were rewarded with some pretty cool trails. A couple of the more well known are probably “Mad if ya don’t” and “B Rude not 2”.

I had to struggle along on his “other” bike – a carbon framed Santa Cruz Solo, while he struggled ahead on the Bronson, also carbon framed.

Honestly, it was only a couple of times when I actually had to lift the bike that I felt the lack of mass.

I went as fast as I was confident to ride, and was pretty scared most of the way down really. I checked out Dad’s usual times for those runs and he was holding back about 25-50% on most runs. Oh dear, I have a lot of catching up to do… 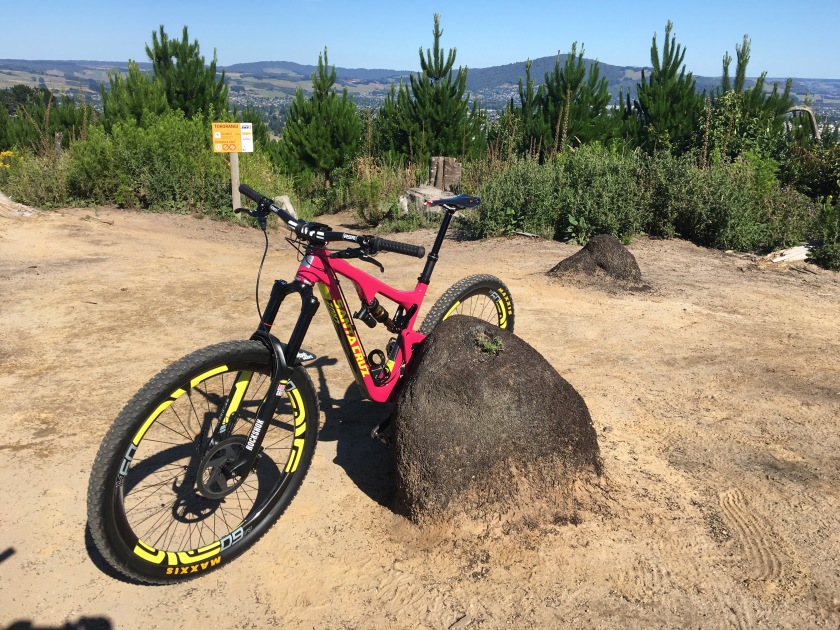 A giant farm bike is sometimes how I feel riding this bike. I think that might be because I’ve not ridden any motards and very few naked bikes.

While in NZ I will be taking every chance to ride this Aprillia Dusodoro 1200. Have done about 150km so far and it’s been good – it’s not the bike I would buy but it’s a good ride.

The first time I chopped the throttle in first gear I almost bumped the handlebars and then opening the throttle I almost flew off the bike. The big v-twin has plenty of go. Manoeuvrability is excellent with the high position, wide bars (not clip ons) and vision is great too. It’s a big dirt bike seat so likely not so comfy long distance.

But with a fuel tank of something like 14L it hasn’t got the range to spend too long before a break. And this is probably the main limitation of the bike if you’re going to be roaming about on it.

Where any bike is better than no bike this is a pretty good bike to be “stuck” with. Not a bike that would suit me or what I ride (I’d almost need to refuel it every other day on the commute) but an interesting ride.

Not day 1, it’s about day 3, but time to write something. I’ve brought the girls over to New Zealand to visit the grandparents. Been a few years since we visited them instead of the other way around.

Two things I am looking forward to are riding dad’s motorcycle and riding MTB in one of the best places in NZ and maybe the whole of Southern Hemisphere!

So far we have walked in some of the bush (once the first day or so of rain cleared up) and been up to the Luge. Both girls had a go on their own, though the younger lost her confidence after rounding a corner and crashing into an adandoned cart. But much fun was had and their slogan “once is never enough” is just as true today as it was when I first started riding it about 25 years ago.