Magdasal was busy questing for this pretty face. It had asked me to raise a couple of friends, so I headed to the swamp above to get them.

I raised the first one without any problems. As they come up you get attacked by a few folks including a “beaver” and a bunch of little ones. During the second one, there was an Alliance panda AFK, right where he rises.

When the small beavers approached, for some reason they aggroed on the afk toon and proceeded to kill her.

Kinda funny to watch actually. Poor player… coming back to a dead toon.

I finished those quests and ran through a few more for the Shado-Pan. Before long, she dinged 90. Ready for WoD. 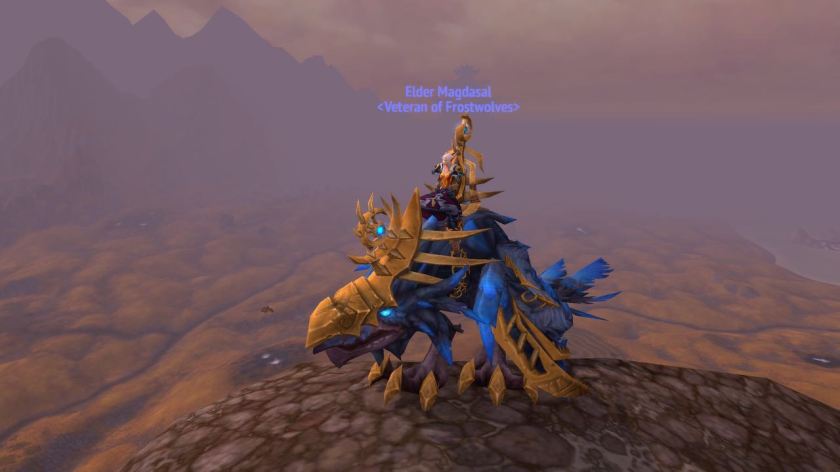 Work kept me busy the other night, then a giant shutdown on Tuesday so no time to play. Finally last night I was …. too sleepy and went to bed (oh dear, I’m getting old).

But I woke up early and squeezed in about 15 mins. That was enough for Dasal to ding 89, so 1 to go. And 1 to go of my aim of 3 90s before WoD. Shouldn’t be too hard to get that last level in the time remaining.

So my return to WoW hasn’t been meet with sudden rush of gameplay, however I have had a few good sessions.

The first thing I did was to reset my UI, I’m now using ElvUI and it is taking some getting used to. The hardest thing is getting the font reset all over the place slightly bigger (My eyes are getting old!) as the default font is smaller than the default UI size.

Mabaho hasn’t been up to much. As usual, I’ve not been around when the Guild has been doing it’s fun things on Fridays and Saturdays. They are just fun things for them, but often things I would like to complete.

Magdasal, (still getting used to the new name) is progressing and should very shortly be level 87. This time though I am running her as Shadow, and that has certainly made questing easy. Possibly even easier than Mab had it. With several of her attack returning health to her, she is very survivable, I guess that makes up for the cloth armour.

I haven’t done any healing, but she has done a couple of runs through LFD. The Brewery last night and the Temple a couple of times. A few upgrades there as well.

I should have secured my chopper by this stage, now it just remains if I decide to Pre Order the WoD expansion. I expect I will, probably next pay.

In other news, my friend Navimie was interviewed on the Blizzcon Countdown podcast the other week. Ep 25. (and don’t forget to listen to Ep 26, where she gets a surprise). My little connection there is that I recommended the hotel as I had stayed there about a year prior.

Been passing the time with a little bit of Pet Battles when I can. Though actually been mostly working on photos and stuff from my holidays so haven’t played a lot.

Anyway, I decided this morning to get back into levelling Mabango. Logged in to find her still not set up since the v5 patch a month ago. I spent some time reading through the new talents and sorting the spells, both old and new, onto the action bars. I’ve also tried to return her keybinds back to the normal configuration with my Naga (fighting on the keyboard, utility on the Naga).

Finally a reread of the current quests and I started out. Mabango is currently in Zul’drak working through the quest hubs. I spent some time as an undead and with a new quest, looks like I’ll be spending some more. The Ensorcelled Choker which disguises me is proof against Scourge except for Blightlords.

I had forgotten how big Mabango’s aggro range is which meant I got pounded a few times. as they detected me. Lost my new demons a couple of times too (I like these new demon models… but they seem a little less tough? Maybe its just our level in this zone?)

NPCScan went off too. Starting moving in for a photo when a scourge jumped us. I attacked but still had Griegan targeted, so he joined in.

Snapped some pictures and finished him off. He dropped some useful mats and a blue (leather item).

Last picture is just a neat shot on approach to TB. I think I’ve turned my graphics up since last time I flew this way, but it looked awesome.

“Boom” NPCScan goes off (I added NPC Scan after the run of rares I had a couple of months back) and Mabango discovers this lady roaming Grizzly Hills.

I thought she looked pretty cool, loved the face tattoos

Got a blue and some mats from her. And Northern Exposure 🙂

I’ve been through Grizzly Hills now on 2 toons and never seem to end up in here. I must miss a quest chain or something.

I’ve also run a couple more LFD and dinged 76, so I moved on to Zul’Drak to keep the xp flowing.

I ran across this NPC and am very tempted to change my DK to look similar. Really liked it.

But that would give me 3 BE fems!  And it might set off a chain reaction of toon changes for some of my alts that I haven’t mentioned on here…. like my hunter might become Tauren which means the UD rogue can swap to Troll…. oh dear.

NINE levels to go now. And I’ll have THREE level cap toons. What a change.

Did everyone do that? I remember until achievements people would pop up with a Ding in guild chat as they levelled, with the hearty congratulations of the guild. I even remember the excited guildies counting down Mabaho’s climb to 80 in WotLK over the weeks it took.

Ding! Mabango has made 74 now. I’ve said it before, the LFD runs are making a significant difference. This morning I did a Utgarde Keep and her first run through Azjol-Nerub. The only drama came at the last boss in AN as half the DPS stepped back out of the circle as the tank pulled, leaving me, the tank and one heals to deal with the boss. It wasn’t some kind of nasty trick, just a little confusion at the pull.

Which was probably slower than it needed to be, but not really a problem. A good thing about the toons outside is that they intercepted some of the adds during the underground phases.

After what seems about 4 quests, and about 3 runs through the Nexus, Mabango was tasked to report to Conquest Hold in Grizzly Hills. She had made level 73 now and is resting up at CH ready for more.

The LFD runs have been mostly smooth. A couple more Utgarde Keep, before continuous Nexus runs. The first Nexus was amusing as we had three BE (a priest, a mage and me) and we’re all in the Ancestral gear, what a fashion disaster. After Anomalus everyone I know skips the ramp and leaps down, avoiding the chasm below. However on run one I noticed someone just making the jump, they’d leapt of a slightly different edge of the platform above.

The next round we had the same priest. This time as I landed I watched as she leapt again and fell just a fraction short. Was a classic moment that I would have loved to have sent to Azeroth’s Funniest Home Videos (hmm… there’s an idea!). I didn’t know who it was at the time and the tank proceeded to lay into the next group of trash.

People were dying all over the place and I was the last standing on about 15%, probably due to my demon pet. The big scary guys were headed my way when I used, for the first time, my Infernal, to distract them whilst I healed up. Saved myself and a Mass Res to revive the party.

So I tried to summon, having not ever used that spell (as Tome says, it’s kinda unused these days) and not really understanding its limitations. Didn’t work of course.

But it was a fun interlude into what becomes a fairly repetitive Random selection.

Has been hard to get a chance to play, so been a while since I’ve put in an update. Mabango has progressed up to 71 and is still bashing away in the Howling Fjords at the moment. Though as I said last time I think that needs to change.

Mobs are going down really easy.

I did try to head up to Grizzly Hills and checked out a quest hub, but the quests are all grey for her. Mabango is too low for the Hills. There’s no point in grinding mobs up there without the big chunks of xp from the quests. However, I will need to check out Dragonblight as it’s really the next done, not Grizzly Hills. I think the problem has been that I have levelled faster than the quests, hence I haven’t got a “quest that takes me to the next  zone” yet.

I’ve also managed a few LFD runs. Building up those JPs already, so when Mabango gets to 85 should have some half decent gear for her.

As for MoP. Discussions at work reckon its about 3 months away. That’s about mid October to mid November I guess. The countdown is starting soon!

Ding. Mabango hit 70 this afternoon. Running in Northrend and a couple of runs through LFD pushed it through pretty fast. May 13 into the portal, July 01 leave 70, that’s one and a half months. Mabaho took… 8 months! Crikey.

I’ve decided to push Mabango through the zones until the mobs are hard, then back up a little as that will get me max xp, without being slowed too much. Meaning that very shortly I’ll move out of Howling Fjord and into Grizzly Hills.

Feels like ages since I had a chance to play, though its really only about 5 days.

Some guild news first, Dragonray from Azerothian Life has joined us, which is pretty cool. She wanted somewhere for one of her alts, a Horde toon, to live so Navi convinced her that no matter what she’s heard, the Frosties really aren’t as crazy as they say. So big welcome to Dragonray.

Midsummer Festival has started, I just checked Mab’s list for that. Ah, everything needs doing except for Ahune. Been pretty slack on his Firelands dailies recently too. Maybe I’ll just run the DS 5mans.

Mabango is still working in Blade’s Edge. Halfway through 67, I’m considering a move to Netherstorm shortly, perhaps at the end of the current quest chain. She did score one achieve when she came across this guy.

So Medium Rare done for Mabango.

I also liked the random way this Son of Gruul ended up too.