No, the Apple one, not an actual airport.

It is really handy when you are travelling and they have free wifi, but only on the cable. If you use the hotel wifi, it costs. With this you have a small device that creates a wifi network for you to use. Pretty cool.

Another cool trick is that it also has a stereo 3.5mm socket. If it is on the same network as another Apple device, such as an iMac or an iPhone, you can connect a stereo through the 3.5mm and the Airport will let you use the stereo as an Airplay receiver.

In Queanbeyan I had it set up with an olde stereo and it was pretty cool. When I moved back to Sydney I didn’t get around to setting up the stereo until a few weeks ago. Then I plugged in the Airport and …

I have been trouble shooting ever since. I can create a new wifi network with the device, but I cannot get it to join my home wifi. I don’t have ethernet close to where I have the olde stereo setup so that isn’t an option.

I have tried resetting it and returning it to factory options. Each time, I can connect to it and manage it. I can create its own wifi network, but not join the existing one. I even tried it when there was no security on the home network (that was a nervous half hour!).

No luck yet. No ideas left either. I’m just repeating my steps hoping something different will happen (isn’t the a definition of crazy/stupid somewhere!). 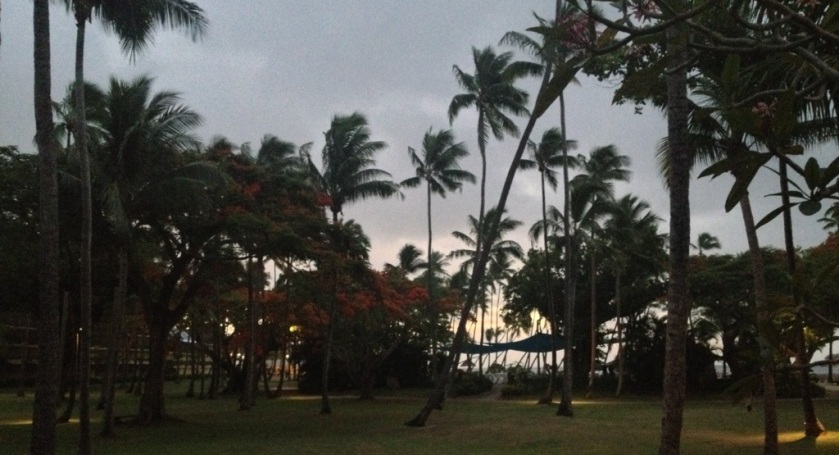 Well we farewell Fiji early tomorrow after an awesome holiday. Mrs Mab has had a fantastic birthday, the girls have had a lot of fun and had some new experiences. We all had some great food and time to relax.

The Fijian people have proved just as friendly as their reputation says. I might not remember anything much from my last visit 30 years ago, but I hope it’s not another 30 before we visit again.

As a tech aside – I brought along an Airport Express as the room has free internet on Ethernet, but no wifi. Any router would have done the same but the small size and the iOS management tool made it an easy run. So Mrs can do her Facebook and Words with Friends and happy wife, happy life 🙂