That’s what my sister and my mum separately described it when I told them.

Sunday night, marginally later than usual I headed down the highway from Sydney to Canberra on my VFR. After my usual refuel at Marulan and a text to wife I was on my.

As I travelled along the edge of Lake George I was passing a car and about level with its doors when it appeared.

Ten foot tall with red blazing eyes and a t-shirt that read “death to motorcyclists” the kangaroo leapt from in front of the car next to me and landed in front of me. At 110km/h I had enough time to think “fuck this is going to hurt”. Well I probably only thought “f” before I’m tumbling down the freeway.

I didn’t resist the tumbling, trusting my gear to do the job I spent a lot of money for. It did seem a while but was probably a few secs later I stopped sliding.

I could see the wire fence on the edge of the highway only a metre or so away. I was pretty shaken and had no idea if I was hurt but I knew if I could get over to the fence I would be as far away from the traffic as I could get. I didn’t want to survive the roo only to get squashed under a semi.

I lay in the drain next to the wire letting myself take a few deep breaths and see if anything was hurting a lot.

Nothing grabbed my immediate attention so I stood up. Up the road to my left was my bike about three metres away. Past that a couple of people were just getting out of a ute. (They were apparently very relieved to see me stand up)

I walked over to my bike with a heavy heart knowing that my bike had seen its last miles this evening. Lying on its side in a pool of oil with the top box burst open I knew the insurers would deem it uneconomical to repair.

I took my helmet off and sat down. The guys convinced me to lie down and it seemed like a good idea. My Kevlar jeans were ripped open on my right knee and a nasty set of gashes poked through. We decided to call the ambulance.

As we waited the guys found a few of my things. I took stock of myself and even with shredded clothing the only other injury apparent to us was a light graze on my wrist.

But it was cold lying there on the road and I presume the shock and adrenaline as well had me shivering almost constantly (it would be after a couple of hours in Emergency before this would stop) About 30mins later the cops turned up, the the tow truck and then the ambos.

I guess about an hour later we arrived at Canberra Hospital. It became obvious that I had been very lucky and that my gear had done its job. I have some deep serious gouges of skin (you can see muscle and bone in the holes) taken from my knee but that’s it. Nothing broken, nothing internal damaged.

From there it’s been a succession of hospital beds and dressing changes. I am supposed to getting a plastic surgeon to look at my knee tomorrow. It’s going to take some work I think and lots of time to heal.

Some people have gone out and checked out the crash site. They figure the bike slid about 100m. They found the roo, well dead and he wasn’t a small one (about 5 feet tall). They found some of the bike with roo hair stuck in it. Most amazingly they found all of my belongings, even down to a couple of USB sticks and my sunnies.

Thanks to all my family and friends for all their support so far. Thanks to the guys who stopped (many didn’t) and I wish you’d left me your details. Thanks to the ambos and other medical folks. And of course thanks to Dainese (jacket and boots), Draggin (jeans), Alpinestars (gloves) and KBC (helmet) for keeping me so safe.

And rest in peace (or pieces??) to my well loved mighty VFR.j 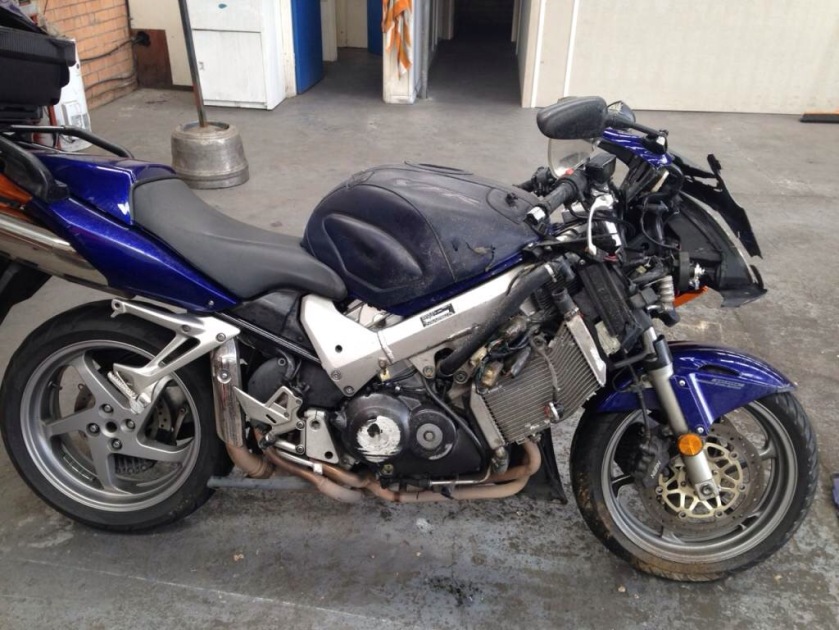