Sometime after the shattering I decided to start a Worgen, to see their story so I started a hunter (a class I’ve never really gotten far in) to experience the story behind the Greymane Wall. This afternoon, Mandorugas reached the relative safety of Darnassus.

It was an interesting story though initially I was a bit confused as to the timeline. I think that the worgen curse started sometime just before Cata (this is a little confused in my memory as I had thought it happened during the Scourge Invasion) and then the Forsaken invaded after Cata broke the Greymane Wall. I also thought that at some point I would learn to change back to human, but that must have been something rumoured before the expac.

There are some interesting little quests. (Warning, SPOILERS ahead if you haven’t raised a Worgen yourself yet)

Eventually Gilneas City is attacked hoping to drive the Forsaken out. The assault goes well and they are overrun. Then we assaulted the Forsaken Commander, none other than Sylvannas herself.

She gets away, but not before killing the King’s son. Later we sneak into her meeting with Garrosh’s representative to find out she’s about to destroy the city with plague.

An attack on the plague machines is carried out, but seems ineffective. So Gilneas is evacuated with the aid of the Night Elves. However the Orc assault must the blunted to allow their escape, so their flagship is stormed and destroyed.

And then we are safe in Darnassus. All the starter quests finish up as Tyrande Whisperwind herself asks for our aid.

So I left my worgen in Darnassus. I had a little explore as I think I’ve only been here about twice before and I certainly wasn’t welcome. 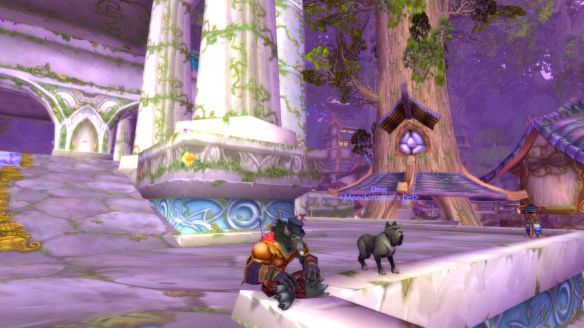 At this stage I’m unsure whether to faction change Mand or just delete him. I haven’t put much work into him really and he’s a little unsupported without Mab and co to help. Something to ponder. No rush though, whilst my character slots are currently full in Dath’Remar, there is an extra coming with MoP so I can still get a Panda. Otherwise I might do a little comparison between my other lowbie hunter (a troll I think)
I did notice that we start out a lot earlier with a pet now, though you can’t control it until level 10. That was VERY confusing as my UI Mod, Bartender, had the menu up but I could never get it to work. Again, some net research reveals all.
The whole thing matches with what Mabango has experienced levelling up since Cata. The quests are a lot more of a story, and there are a lot of interesting things to do, rather than kill 40 Zhevras, now so many Hyenas, and lions and then…. arrgh. Still some of that, but it’s not so annoying and forms more of a part of the story. Blizz have again done a good job here.